In the Desert, But Never Deserted

In the Desert, But Never Deserted

My husband, Tim, and I went to the desert for some mountain biking with friends last week. And I’m not talking about a cushy desert stay at the Gonzo Inn in Moab, either. I’m talking remote wilderness, people. After a two hour drive south from Green River on mostly dirt roads, we were dropped off in the Maze District of Canyonlands National Park. It was just six friends on bikes, two guides, and a sag wagon that had a few paltry supplies like fine wine and delicious meals which were prepared for us three times a day. We were ROUGHING IT, people. Think Bear Grylls. Think Aaron Ralston. No wait. Don’t think Ralston (bless his heart) — we all made it out with our limbs intact so that is definitely not a good comparison. Anyhoo, we were out there. We literally saw one other car and three whole human beings in five days. I’m talking RE-MOTE. The kind of wilderness that defines solitude and death by dehydration.

And it was on day three of our 115 miles of back-country desert mountain-biking in this beautiful vast no-man’s-land that I. Got. Lost.

Here my husband would chime in and clarify for you all that I was “lost” (and, yes, he would probably use air quotes) for, like, 15 minutes, to which I would say: WHATEVER.

I started out with the whole group after lunch but somehow I got a little separated from everyone (and if you say it’s because I am a slow biker then you are no longer my friend). I knew the group was in front of me and that somewhere in the distance behind me was the sag wagon but for an entire hour, friends, I saw no one. That’s an eerie feeling in the desert. Every few minutes I would take note of the bike tire tracks in the sandy dirt in front of me, assuring me I was still on the right path. I cursed the sand but it was comforting just to see those sets of tracks. Until they weren’t there.

Somewhere on the ride I got distracted, confident, cocky even.  And I missed a narrow little, crucial left hand turn. I estimate I was about 15 minutes off course when it dawned on me I hadn’t seen any of those symbols of hope in the tracks before me for a reaallllly looooong tiiiimmmme. And then it started to rain. And then I came to an intersection.  A literal four-way intersection. In the middle of nowhere. I had no idea where to turn.

All because I had taken my eye off the tracks laid before me.

So I did the only thing I could do. I hopped off the bike, shook my head in disbelief, sat down in the middle of the road and said a prayer. I waited at that intersection for an eternity (or 15 minutes if you’re listening to my husband) until God arrived in the form of Mike, the blessed sag wagon driver. Apparently some friends had alerted him when they’d seen four tracks turn left, and one lonely set of tracks heading straight into the wilderness alone.

I believe that we as human beings are constantly being called to the path which leads to God. We are continuously progressing toward that which is best and most fulfilling in our lives — God. Love. Joy. Hope. And it is God leading, yes, but sometimes it’s also the people who surround us whom God sends to guide us in love and encouragement in life. Our job is to intentionally and purposefully follow the tracks of God: God’s word, God’s people, and those whom God sends as our companions to keep us where we need to be. And when we lose our way we must stop and wait until we are certain of the next best move.

And sometimes the next move is to hitch a ride with someone who has a truck full of provisions and knows the way home…..

About the Author: Charla Belinski 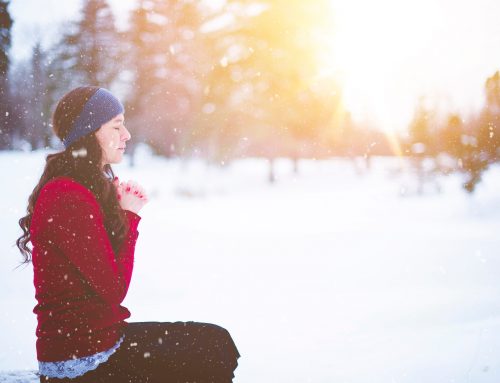 From Fried Chicken to Funerals: Why Rituals Matter

From Fried Chicken to Funerals: Why Rituals Matter